Between light and shadow

An invitation to see the music, and to hear the dance

“Faced with the progression of the three movements of the score and the intensity of the interpretation of the three percussionists, I wanted to confront three dancers of my generation who dance with a contemporary force, while controlling elegance, classic sophistication.

In the work process, the search of a common vocabulary, a sensible dialogue between musicians and dancers, as far as the exploration of partition depths, have shaped the construction of the choreography that I dream as an invitation to ” see the music and hear the dance ” like Balanchine so beautifully said.” SB

- “Then Trio per uno designed by Sébastien Bertaud on a piece for three percussionists by Nebojsa Jovan Zivkovic. Bertaud already has repeatedly shown his choreographic talent in years past, this time he built a beautiful piece for three dancers as athletic as poetic, deploying with strength and a constant renewal the very large artistic possibilities of his three performers. Principal dancers Audric Bezard ,Vincent Chaillet and the beautiful ballerina Amandine Albisson. Bezard and Chaillet are large, with ample dance, strong but not harsh, endless legs and arms, perfect bodies. Bertaud knows how to use this potential exception by playing with the rhythmic subtleties of music, combining them both in contrasts and mirror with the grace and fluidity of Amandine Albisson. New, different, creative and highly applauded, of course. ”

- “In Trio per Uno, Sébastien Bertaud, as two years ago when dancer-choreographers evening, developed a gesture in the” neo-forsythienne ” vein on the score of Nebojsa Jovan Zivkovik. The duet between Audric Bezard and Vincent Chaillet, strong undressed, allowed the two soloists to show the explosive quality of their dance, a kind of bullfighting fight where everyone would turn the matador or the victim The second movement, musically calmer, show Amandine Albisson. She was walking, so serpentine pirouetting around the boys sprawled out from exhaustion. Sébastien Bertaud has an innate sense of musicality. He knows showcase its dancers. His mastery of the plateau is also strong. The squares and luminous rectangles popped the ground in a recomposed space.  In the last movement, the dancers and the music became wildly percussive. ”

- “It is then the most anticipated moment of the evening and managed by Sébastien Bertaud on the music by Zivkovic. Three movements, three groups of instruments, three musicians and three dancers. The first movement is violent, Bezard, Chaillet in boxers and [some in the room did not survive] seem to clash. At first, they dance with each other, meet their respective movements and fate of each square of light and dance regardless of other. They eventually end up as a mirror, a reconciliation. The second movement comes up with the lovely Amandine Albisson that on a much more cute and lightest partition brings sweetness in this world of crude. After a first solo she danced with both of his comrades. Bertaud said he chose the dancers for their complementarity between classical and contemporary language strength. He could not have chosen better, every movement is graceful. The piece ends with some very pretty music instruments such as xylophones, which are quite suitable for the dance world. ” 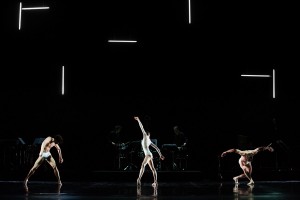 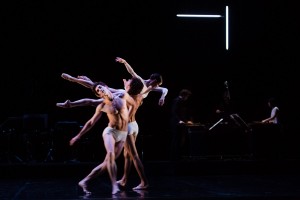 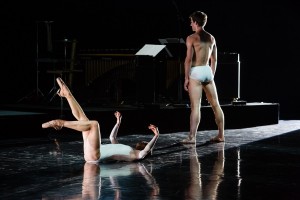 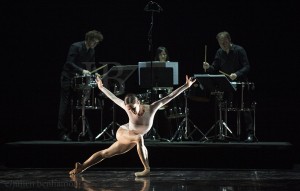 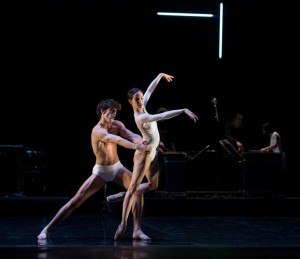 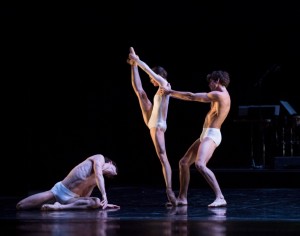 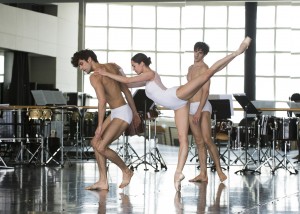 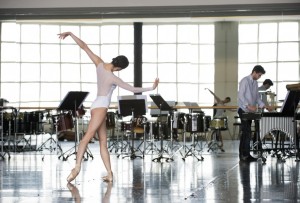 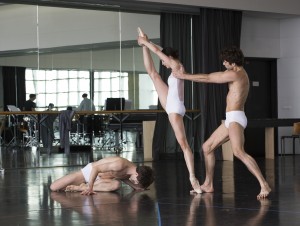